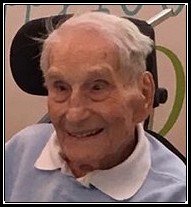 Mr. William “Bill” Nicoll of Tillsonburg, and formerly of , passed away peacefully at the Maple Manor Nursing Home, Tillsonburg on Sunday, July 28, 2019 in his 101st year. Bill was a dedicated Veteran of World War II, serving as a Member of both the Royal Canadian Regiment and the Royal Canadian Air Force. Proud Member of the Royal Canadian Legion, Branch #125 (). He was an avid golfer and fisherman. Former Member of the Optimist Club and Senior Citizens’ Friendship Centre.  Beloved husband of the Late Irene (VanGoethem) Nicoll (2019). Loving father of Nancy Nicoll O’Neill (Mickey) of . Survived by Betty Ann Smet (Larry) of , several grandchildren, and many nieces and nephews. Predeceased by his son Robert Nicoll, by his two brothers: Alec Nicoll (1976) and Jack Nicoll (1982), and by his two sisters: Lillian Waldick (1982) and Margaret “Peggy” Caughill (2016). A special thank you to the staff, doctors and nurses at Maple Manor Nursing Home, Tillsonburg for their compassionate and dedicated care of Dad. As per Bill’s wishes, a Private Family Funeral Service will take place. Inurnment in . Memorial Donations to the Delhi Community Health Centre or the Charity of your Choice can be made through the MURPHY FUNERAL HOME, (519) 582-1290 (mfh.care) and will be gratefully appreciated by the family.