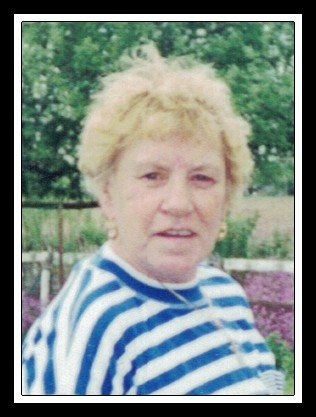 Mrs. Sherry  Franco of , passed away at her home in peacefully on Wednesday, July 10, 2019 in her  82nd year. Sherry was an avid gardener and loved animals, especially strays. Former Sherry Lee Kalle. Beloved wife of the Late Almerindo Franco (2013). Loving mother of Alice Franco. Cherished grandmother of Brianna (), Cristiano, Sara and Michael. Dearest sister of Maurice "Moe" (Peggy) and Shirley Linn. Also survived by several nieces, nephews and in laws. Predeceased by her brothers, John O'Keefe, Gary Franco (2013), Robert (1995), Ron (1971) and Louie (1979) and by her sisters, Margaret Rutter (1995) and Geneva McLasky (1994). Visitation will take place on Saturday, July 13, 2019 at Our Lady, Queen of Martyrs Roman Catholic Church, from 2:00 to 3:00 p.m. A Funeral Mass will be held following visitation at 3:00 pm. with officiating. Interment in . In lieu of flowers, donations to the Purrfect Companions of Delhi, Camp Trillium/Rainbow Lake or the Simcoe & District Humane Society can be made at the MURPHY FUNERAL HOME, (519) 582-1290 (mfh.care) and will be gratefully appreciated by the family.