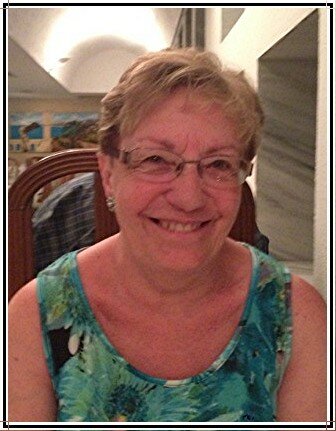 Mrs. Rita Roe of Tillsonburg, formerly of , passed away peacefully, with family by her side at VON Sakura House, on Wednesday, September 28, 2022, following a 2+year battle with cancer. She was in her 78th year.

Beloved wife of David Roe for more than 45 years. Loving mother to Marcie Walters-Turcotte of Tillsonburg and Pennie Walters of . Cherished grandmother to Epple and Lynden Turcotte. Rita is also survived by two aunts and one uncle in and by cousins both in and in . Predeceased by her parents Arthur Fevery (1998) and Mary (De Vlaeminck) Fevery (2014) and by an infant sister, Monica (1941).

Rita was born on August 24th, 1945 in Eeklo and came to with her mother in December 1953. She had vivid memories of the trans-Atlantic voyage and being greeted by the Canadian Red Cross with a cup of hot chocolate when they landed in . This was followed by a long train ride to .  They joined her father who was working on a farm near La Salette, . They moved to shortly thereafter. Being an immigrant, she had to quickly learn a new language and adjust to life in .  She attended and St. Frances Catholic Schools, and . Rita spent more than 40 years of her working life in the insurance field. She obtained her professional designation as a Certified Insurance Professional (CIP).  She was an insurance underwriter for Simcoe and Erie General Insurance, an insurance broker for: Leitch-Gair, Les Vanka and Ted Newton, a claims representative for Laidlaw Carriers and finally as an insurance underwriter for Federation Insurance. She was also a co-owner, with her daughter Marcie, of Jasmine House Fine Lingerie and Sleepwear in Tillsonburg (1994 to 2002).

Upon her retirement in 2003, Rita found a passion in pottery and was an active member of the Norfolk Potters Guild in Simcoe. A natural artisan, she taught courses in the artistic craft, sharing her love of the art form. She served on the guild executive board for many years and took pride in serving as president of the guild. Expanding her love of the arts she also served as a member on the board of the Norfolk Arts Centre in Simcoe and was proud to serve as chairperson for a year.  Rita was also an avid gardener, working hard to establish a landscaped perennial garden and yard in her home in . Rita was a long time and active regular member of St. Albans Anglican Church in where she was a member of the choir and the alter guild and participated in many church events. Rita and her husband David traveled extensively during her retirement years with multiple trips to Caribbean, , , , , , and .  Some of her most enjoyable trips were to where she was reintroduced to her place of birth and was able to establish closer relationships with her family.  She particularly enjoyed a vacation in Nice on the French Rivera.

The family would like to thank Dr. Claire Reade and her team from Jaravinski Cancer Centre in Hamilton, the Oxford Palliative Care team, especially nurses Kim and Greg, Paramedic Palliative Care team from Woodstock and lastly Dr. Fryer and the nurses and PSW’s from Sakura House (hospice) in Woodstock for the care and compassion they provided to Rita during her cancer journey.

Friends may call at the MURPHY FUNERAL HOME, (519) 582-1290 (www.mfh.care) for visitation on Friday, October 7th from 5:00 p.m. to 8:00 p.m. A Funeral Service will be held at St. Alban's Anglican Church, Delhi on Saturday, October 8, 2022 at 11:00 am. With officiating. Cremation to follow. Interment of ashes will be a later date.  Following the church service a light lunch will be provided at the Masonic Hall located at .  Memorial Donations to the VON Sakura House (hospice) in and the Norfolk Humane Society will be gratefully appreciated by the family.