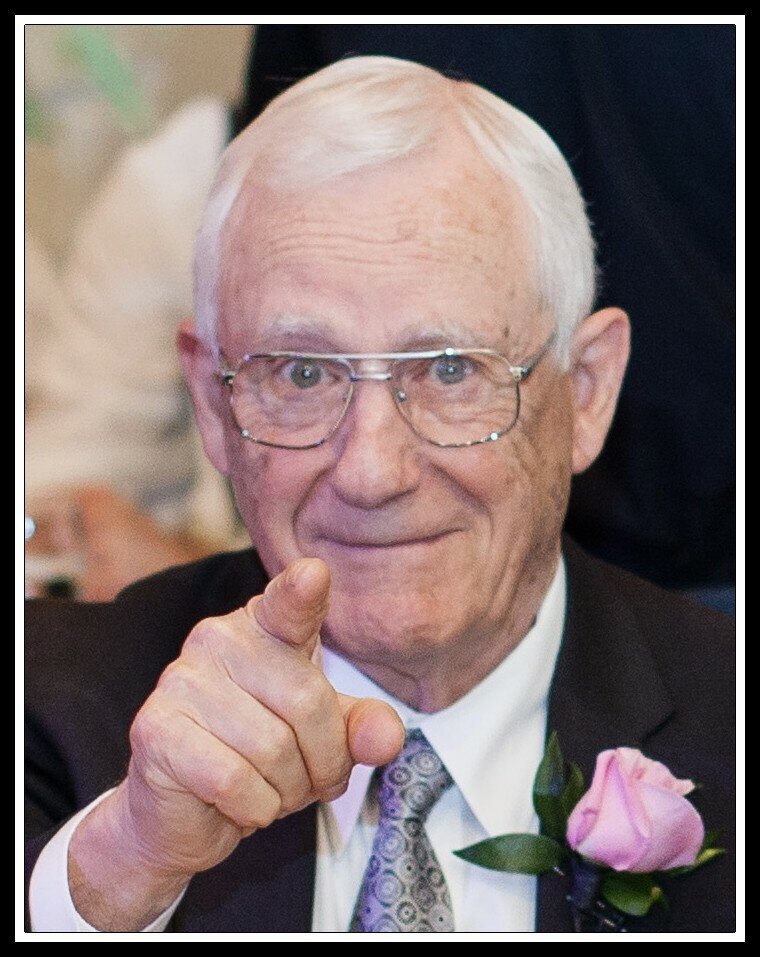 Mr. Paul Quenneville of  and formerly of , passed away peacefully surrounded by family at his home on Sunday, September 18, 2022 in his 93rd year. Beloved husband of the Late Jennie (Denys) Quenneville for over 56 years. Loving father of Lise Bogar (Leslie), Lynne Collins (Jim), Shawn  Quenneville (Irene), Julie Quenneville (Neil Thorpe), Ann Quenneville, Chris Quenneville (Cathy) and Craig Quenneville (Susie). Cherished grandfather of Liana, Lesley, Kyle, Cara, Regan, Conor, Taylor, Rory, Tegan, Brodie, Raissa, Peri, Declan, Rob, Greg, Jeff, Katie, Chloe and Keaghan and great grandfather of Aubrey, Braedon, Louie, Harper, Myles and Everett.  Paul was born in , the fifth child of Rosaire Quenneville (1983) and Arise (Levesque) (1986). Dearest brother of Sr. Marie-Anne Quenneville osu, Margaret Murtagh (Joe, 2017), Simone Balsam (Stan), Claire Pitre (Reg, 2019), Jeanne Quenneville, and Thérèse Quenneville.  He was predeceased by his dear brothers, Luc Quenneville (1994) (Elaine), Bernard Quenneville (1995) (Irene), Philippe Quenneville  (2005) (Bev, 2016), (Anne-Marie, 2007), Louis Quenneville (2009) (Carmen, 2007) and his dear sister Cécile Quenneville (2021).  He will be greatly missed and lovingly remembered by many nieces, nephews and extended family. Paul retired from teaching at in 1986 after teaching there for 32 years.  He taught French and Physical Education and coached many students in football, basketball, volleyball and gymnastics.  He spent the latter part of his career as a guidance counsellor and became Head of Student Services at DDSS.  After retirement, Paul and Jennie (2012) enjoyed trips to , , and spent many winters in . Paul’s number one passion in life was his family. He was always proud of his seven children, grandchildren and great grandchildren, and he always looked forward to seeing everyone at family gatherings: the more, the merrier!  His other passion was golf. He was a long time member of the Delhi Golf and Country Club, and he also wrote a weekly column for The Delhi News Record called “On The Green,” which featured the local golf scene. Six years ago he moved to and became a member at The Oaks Golf and Country Club, where he met many new friends and enjoyed many more rounds of golf. Other pastimes included daily crossword puzzles, walking, old movies, reading and telling jokes. Laughter was his medicine! Heaven has gained the sweetest soul. Paul was adored by his family.  He was caring, a good listener, and a wonderful friend. He will be forever in our hearts. A Memorial Mass will be held at Our Lady, Queen of Martyrs Roman Catholic Church, Delhi on Wednesday, October 12, 2022 at 12:30 p.m. Inurnment in Delhi Cemetery. Memorial Donations to the Canadian Cancer Society or the London Health Sciences Foundation can be made at the MURPHY FUNERAL HOME,  (519) 582-1290 (www.mfh.care) and will be gratefully appreciated by the family.