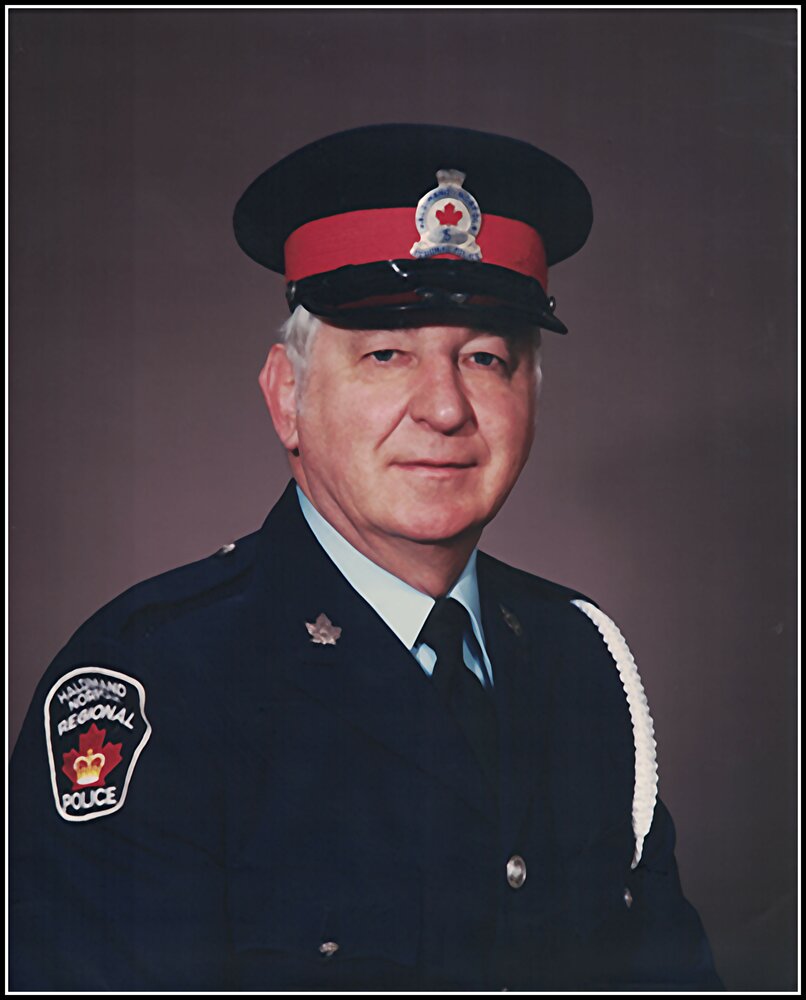 Mr. John “Jack” Foglton, formerly of , passed away at The Village of Glendale Crossing, and went to the Loving arms of Jesus on Thursday, January 20, 2022 in his 89th year. He was raised in where he resided most of his life (until 2018). Jack joined the Delhi Police Force on May 22, 1956. Worked for the Delhi Police and the newly amalgamated Haldimand Norfolk Regional Police until his retirement on December 31, 1987. Post-retirement, he joined the Simcoe OPP detachment where he worked for several years. He felt honoured to Serve and Protect the members in his community and was well-liked by many friends and acquaintances in and surrounding areas. Jack was a 2nd Degree Member of the Delhi-LaSalette Knights of Columbus and a Devout Member of Our Lady, Queen of Martyrs Church, . Jack was passionate about his family and was always happy when the children, grandchildren, and great-grandchildren stopped by for visits. He shared many stories with them about his childhood and bygone-years, and was never at a loss for good conversation. He enjoyed gardening and would spend hot summer days tending to his vegetable patch or puttering around the yard. He spent many summers up north renting a cabin for holidays. One of dad’s highlights was his annual corn roast he hosted every September long weekend to close the summer.  Jack enjoyed long walks and would often be seen with his four-legged companions in the surrounding field and woods near his home.  His family will remember him as a devoted husband, a loving father, and a good friend. Beloved husband of the Late Joan Ivey (Leigh) Foglton (2015). Loving father of Deborah (Brent), Shelley (Tom), Vivian (Mark) and David. Cherished grandfather of Tom, Katie, Kenny, Cheryl, Britney, Whitney, Hillary, Kristopher, Jonathan, Adam, Matthew and of many great-grandchildren. Dearest brother of Olga. Also survived by several nieces, nephews and in-laws. Predeceased by his parents, Louis & Stephanie (Miskoczy) Foglton, by his son Rick Foglton (1997), by his great-grandson Jackson Lavers (2015) and by his siblings Margaret, Bill, John, Annie, Nellie, Rosie and Theresa. The family wishes to extend their thanks to Father Saleem Amir and the Pastoral Team of Springbank Catholic Family of Parishes in , , staff and volunteers at The Village of Glendale Crossing in , , and Murphy Funeral Home, . In consideration of the continuing health and safety of our friends & family, a Private Family Funeral Mass will be held at Our Lady, Queen of , with Interment in . A Special Celebration of Life for Friends & Family will take place at a later date. In lieu of flowers, please consider Memorial Donations to the Brain Tumour Foundation of Canada or the Charity of your choice which can be made through the MURPHY FUNERAL HOME, (519) 582-1290 (www.mfh.care) and will be gratefully appreciated by the family.