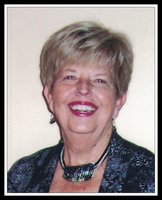 It is with deep sadness that we the Geerts’s family share the passing of our much loved mother, grandmother, great grandmother, sister, aunt and friend. Marilyn Jean (Bornholdt) Geerts passed away peacefully with family by her side on Tuesday, March 16, 2021 at her home in Simcoe. Marilyn was born in on February 28, 1937 to parents Lillian Ester (Jensen) and Mark Francis Bornholt.  Soul mate to her beloved husband, the Late Julian Peter Geerts (1995) whom she married November 27th 1957. Marilyn was predeceased by her husband by 26 years. Loving mother of Larry (Mary Frances), Rick (Mary) and the late Diane Long (2010). Cherished and adored grandmother and great grandmother of Daryl Geerts (Lydia) and their children Cooper, Callie and Jack; Alan Geerts (Lise) and their children Ray and Blaire; Brian Geerts and Emily Gilmour (Greg), all whom she had a special bond. Dear sister of Frances Moss () also survived by several nieces and nephews. Marilyn and Julian enjoyed many happy times together with many family and friends. They could often be seen in Caledonia with members of the Kinsmen Club, in at the German Home, Royal Canadian Legion Branch 125 or the Delhi Golf and Country Club. They shared a passion for bowling, darts, and golf. Marilyn had several jobs in her lifetime including school bus driver for VanHove and Verspeeten Bus lines, and later in life at the auction exchange as Kitchen Manager. She loved both careers with life long stories. After Julian’s passing she made the difficult decision to move to Simcoe, where she enjoyed shopping, Simcoe Little Theatre, The Strand Theatre, Simcoe Seniors Centre, Lighthouse Festival Theatre in Port Dover or playing in both Simcoe and Tillsonburg. She was a Member of St. John de Brebeuf Catholic Church in and currently St. Mary’s Church in Simcoe. Marilyn enjoyed visits with family, and friends who never left hungry or thirsty and, if you were lucky enough, to enjoy her never ending trays of cookies and treats. She always greeted everyone with her beautiful smile and a “Hello, how are you today?” As per Marilyn’s wishes cremation has taken place with a Private Family Service. If desired, Memorial Donations in Marilyn’s Memory can be made to the  Foundation or a Charity of Choice through MURPHY FUNERAL HOME,  (519) 582-1290 (www.mfh.care).